Bahrain Pavilion at Expo 2020 offers unique experience for the world 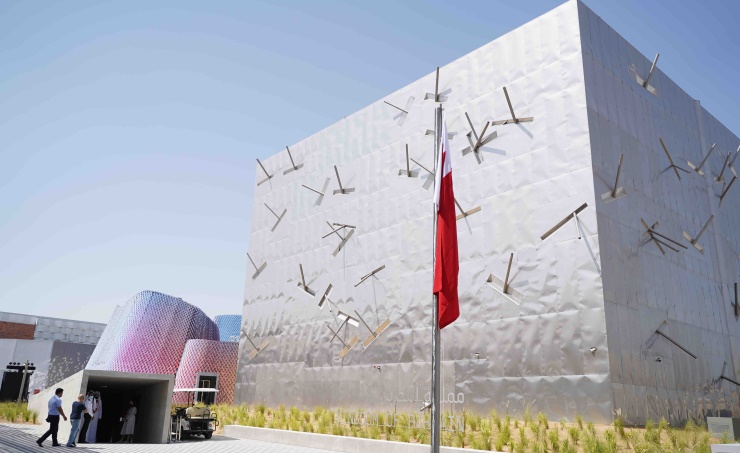 Dubai :  Innovation flourishes where change occurs. When spaces are open to different ideas, perspectives and behaviors, a dialogue enabling progress forms. These spaces, however, are hardly elite offices or prestigious forums in our modern day; they are public spaces, the meeting points of communities and individuals.

Events such as Expo 2020 Dubai recreates such conditions on a large scale, a worldwide playground for the people under the slogan ‘Connecting Minds, Creating the Future’, and the National Pavilion of Bahrain is a remarkable example showcasing the symbiotic relationship between physical space and innovation. An immersive experience designed by Swiss architect Christian Kerez, Bahrain’s National Pavilion is an architectural masterpiece exploring the country’s ethnographic and cultural density as an enabler of promising opportunity.

Exhibitions, art installations, performances, a shop and a restaurant are interwoven in a single open-space plan, mimicking the interconnectivity of various subgroups that simultaneously cohabit the Kingdom.

The freedom visitors have in how they move through this space, curating their own individual experiences, mirrors the plethora of cultural expressions in Bahrain — in other words, depending on how you engage with the culture given at hand, experiencing Bahrain as a Pavilion or nation differs from one person to the other.

The National Pavilion of the Kingdom is an open and slightly submerged space accessible by a ramp forming a bridge from the exterior to the interior. A 50m-long ramp shields visitors from the colorful and heterogeneous surroundings outside the pavilion. The access ramp leads past the side of the building and only later turns towards the main space. At the rear, a wide canopy leads via a staircase to the majlis.

The majlis forms a spatial figure that is also visible from the outside, while all the other rooms around the hall remain hidden.

The structure of this central space is a 24m high rectangular building with a central and open exhibition space (900 sqm) held by 126 steel columns – which are 11cm in thickness. In addition to functioning as a support mechanism to one another and the ceiling, the columns elegantly reference the principles of communication and density in exploring three-dimensional possibilities inspired by the traditional geometric plaster ornamentations of traditional Bahraini architecture. Like walking through a dense forest, the 126 columns allow visitors to freely experience the exhibition and planned pavilion program, while the aluminum-made exterior facade represents one of Bahrain’s main exports.

In most buildings, columns and beams usually articulate architectural space horizontally and vertically closely following the boundaries, but here the columns are spread out unfathomably in all directions. They penetrate the walls and the ceiling and also protrude from the facade. The placements of the windows and their angle within the thin envelope are a pure consequence of the geometrical arrangement of the columns. It makes for playful lighting coming into the space in unexpected and irregular ways, constantly changing throughout the day as the position of the sun changes in the sky. These slanted columns meet repeatedly in the space creating a dense and stuff structure built with the 11cm steel columns whereas the walls are equally thin in relation to their actual dimensions built with frames made of 14cm thin profiles. While the slender columns seem extremely dense in overview, it is surprising how light and sparingly placed they appear, while walking through the built space.
In most buildings, the support structure is only serving its purpose to make the building stand up, but in this building it becomes a space-defining, architectural event and a spatial experience that cannot be readily deciphered. It is not illustrative. This unusual and futuristic spatial effect allows open fields of association to the Kingdom of Bahrain, for example to the floor plan typologies of old houses in Muharraq, to their introverted living spaces, to the dense, irregular, traditional ornaments in Bahrain, as well as to the latest technologies such as those used by the MacLaren Formula 1.

As sustainability is a main challenge for every temporary exhibition today, the Pavilion of the Kingdom of Bahrain – the prefabricated panels of the walls and the ceiling, the load-bearing structure, whole technical equipment including lighting, air conditioning and the interior design — will be dismantled after the Expo and reassembled in Manama, offering a new public space in the business center of Bahrain. The 126 columns connected in so many ways is a spatial experience of the varied cultural origins that are part of the sociocultural and economic fabric of Bahrain. It is a demonstration of density bolstering this small but mighty nation’s rich cultural productions and identity.