Home›GULF›BAHRAIN›Bahrain exports BD4.967 billion worth of products of national origins during 2022
BAHRAINNEWS

Bahrain exports BD4.967 billion worth of products of national origins during 2022 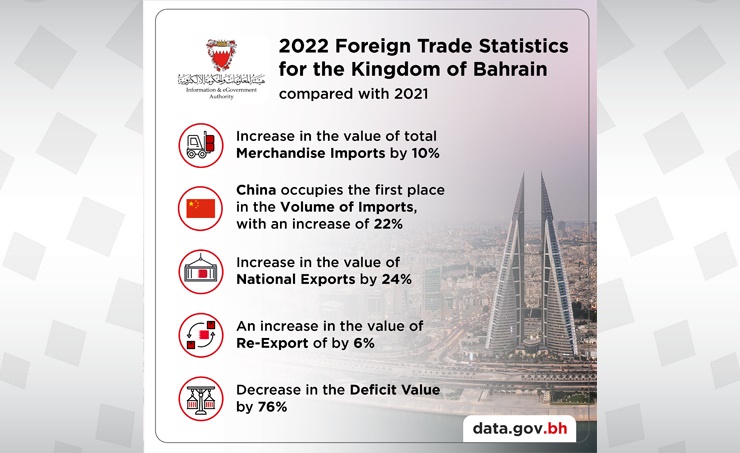 The value of imports increased by 10%, reaching BD5.842 billion during 2022 compared to BD5.316 billion for the same previous year.

According to the report, China ranked first when it came to imports with a total value of BD845 million, Brazil was the second with BD620 million, and Australia was the third with BD509 million.

Non-agglomerated iron ores and concentrates emerged as the top product imported into Bahrain with a total value of BD698 million, while Aluminum oxide was second with BD468 million, and parts for airplanes third with BD168 million.

Moreover, the report indicates that the value of exports of national origin increased by 24% reaching to BD4.967 billion during 2022, compared with BD3.994 billion for the same previous year.

The top 10 countries in terms of the value of exports of national origin accounted for 72% of the total value, while the remaining countries accounting for 28%.

Unwrought aluminum alloys emerged as the top products exported during 2022 with BD1.750 billion, Agglomerated iron ores and concentrates alloyed was second with a value of BD798 million and unwrought aluminum not alloyed third with BD245 million.

The total value of re-exports increased by 6% to reach BD720 million during 2022, compared with BD679 million for the same previous year.

Parts for airplanes the top product re-exported from Bahrain with BD113 million, wristwatch nonprecious meta came in second place with BD36 million, and other mountings fittings and the like for vehicle came third with BD32 million.