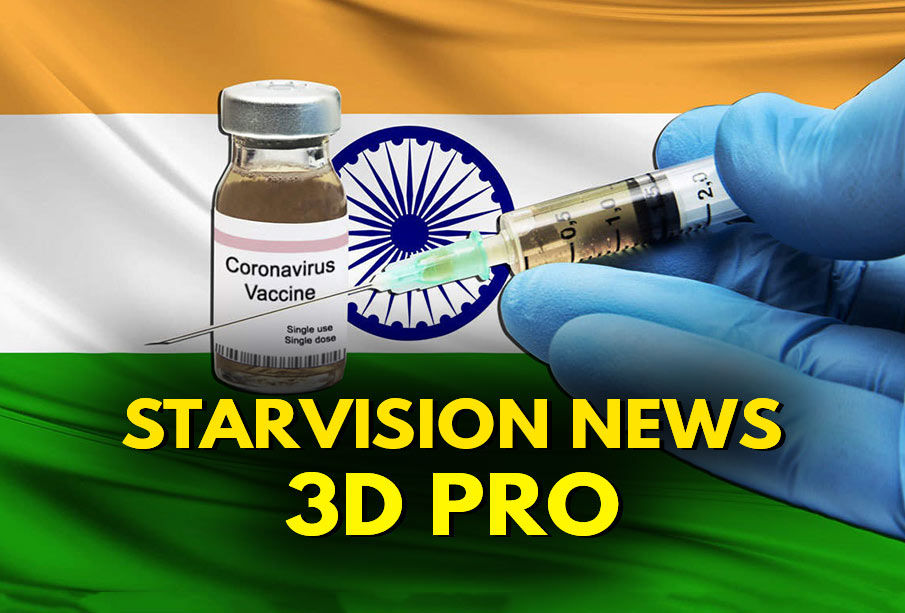 India will provide free COVID-19 vaccines to all adults, Prime Minister Narendra Modi said on Monday, in an effort to rein in a pandemic that has killed hundreds of thousands and led to the world’s second-highest tally of infections.

Modi’s announcement on national television came after weeks of criticism of a bungled vaccine rollout that has covered fewer than 5% of India’s estimated adult population of 950 million.

Health experts have warned that vaccination is the only way to protect lives from a third wave of infections after a surge in April-May overwhelmed hospitals in the big cities and in the vast hinterland.

Modi said the federal government would take over the vaccination programme from the states from June 21, reversing a policy under which states were running a part of it.

Under the earlier policy, the federal government gave free vaccines to the elderly and frontline workers, and left state governments and private hospitals to administer doses for a fee to people in the 18-45 age group.

State governments were also competing against each other to procure vaccines from local manufacturers as well as foreign firms, with little luck. Grappling with acute shortages, several states imposed strict curbs, including wholesale lockdowns, in recent weeks. Several vaccination centres also shut down within days of the widening of the campaign to include everyone above the age of 18.

“We will increase the speed of procuring vaccines and also increase the pace of the vaccination programme,” Modi said.

Last week, the government said it could have as many as 10 million doses each day in July and August, up from just under three million now. Some hospitals said a uniform policy to distribute vaccines could ease the burden of procurement and prices.

Modi said the government would allow private hospitals to have 25% of all vaccine supplies but not to charge more than 150 rupees ($2.06) over the cost of the dose.

The Food and Drug Administration said it granted approval to the drug from Biogen based on results that seemed “reasonably likely” to benefit Alzheimer’s patients, said AP. It’s the only drug that U.S. regulators have said can likely treat the underlying disease, rather than manage symptoms like anxiety and insomnia.

The decision, which could impact millions of older Americans and their families, is certain to spark disagreements among physicians, medical researchers and patient groups.

It also has far-reaching implications for the standards used to evaluate experimental therapies, including those that show only incremental benefits.

The new drug, which Biogen developed with Japan’s Eisai Co., did not reverse mental decline, only slowing it in one study. The medication, aducanumab, will be marketed as Aduhelm and is to be given as an infusion every four weeks.

Dr. Caleb Alexander, an FDA adviser who recommended against the drug’s approval, said he was “surprised and disappointed” by the decision.

“The FDA gets the respect that it does because it has regulatory standards that are based on firm evidence. In this case, I think they gave the product a pass,” said Alexander, a researcher at Johns Hopkins University.

The FDA’s top drug regulator acknowledged in a statement that “residual uncertainties” surround the drug, but said Aduhelm’s ability to reduce harmful clumps of plaque in the brain “is expected” to help slow dementia.

Under terms of the so-called accelerated approval, the FDA is requiring the drugmaker to conduct a follow-up study to confirm benefits for patients. If the study fails to show effectiveness, the FDA could pull the drug from the market, though the agency rarely does so.

Amazon’s billionaire founder Jeff Bezos said on Monday he and his brother Mark will fly on the first crewed space flight from his rocket company Blue Origin next month.

“Ever since I was five years old, I’ve dreamed of traveling to space. On July 20th, I will take that journey with my brother,” Bezos, who is one of the richest people in the world, said in an Instagram post.

Bezos, who is due to step down as Amazon’s chief on July 5, will join the winner of an auction for a seat on the first space flight from Blue Origin.

Bezos, fellow billionaires Elon Musk and Richard Branson have been investing billions of dollars on their rocket startups, but Bezos will be the first of the three to actually travel into space on a rocket developed by his own company.

The Blue Origin spacecraft, which is set to carry Bezos and others, has undergone 15 test flights, none of which had any passengers onboard. Blue Origin closed the first round of the auction last month and said it had received more than 5,200 bidders from 136 countries, without disclosing the highest bid from the round.

One mosque shut for 2 weeks after COVID cases discovered

The Ministry of Justice, Islamic Affairs and Endowments has closed one mosque after the National Medical Team for Combatting the Coronavirus (COVID-19) discovered positive cases there.

The mosque, located in the Southern Governorate, will be closed for two weeks “in order to preserve the requirements of public health and protect worshipers,” the ministry said.

“The time will be used by the relevant teams to carry out the process of tracing contacts, sanitize the premises and ensure that all precautionary measures are taken.”

Bahrain has re-opened mosques for the five daily prayers, but insisted that worshippers comply with the health protocols and measures to ensure their safety. Mosques that failed to adhere to the measures were temporarily closed.

The ministry warned that it would follow up on the implementation of the mandatory measures at mosques and intensify inspections to protect worshippers’ health and safety.

Google said it would make changes to its global advertising business to ensure it did not abuse its dominance, bowing to antitrust pressure for the first time in a landmark settlement with French authorities. The deal with the French competition watchdog could help rebalance the power over advertising in favour of publishers, which held sway over the business in the pre-internet era but lost control with the rapid rise of Google and Facebook.

The settlement, which was announced on Monday and also saw Google fined $268 million, is the first time the U.S. tech giant has agreed to make changes to its huge advertising business, which brings in the bulk of its revenue.

“The decision to sanction Google is of particular significance because it’s the first decision in the world focusing on the complex algorithmic auction processes on which the online ad business relies,” said France’s antitrust chief Isabelle de Silva.

Ad Manager provided AdX with strategic data such as the winning bidding prices, while AdX also enjoyed privileged access to requests made by advertisers via Google’s ad services, the authority said.

AdX, in turn, exchanged data more smoothly with Ad Manager than it did with other advertising management platforms, the watchdog added. Such platforms are crucial for publishers to manage and sell advertising space.

Under the terms of the settlement, Google made commitments to improve the way Ad Manager services worked with rival ad servers and ad space sales platforms, the French watchdog said. Some changes would be implemented by the first quarter of 2022, it said, adding that Google would not appeal the decision. Google also said it had agreed to make it easier for publishers to use its data and tools.

“We will be testing and developing these changes over the coming months before rolling them out more broadly, including some globally,” the company added.

Bahrain, represented by the Information & eGovernment Authority (iGA), has announced the hosting of the “Virtual Regional Workshop for eGovernment Experts” (ReGE21). The event will provide valuable inputs to the United Nations eGovernment Development Report 2022 as well as present key Arab issues that should be incorporated in the report.

iGA’s pioneering and distinguished role at the regional level, related to the development of eGovernment, supporting the system of cooperation and exchange of experiences between Arab countries, makes it the perfect organization to host the event.

iGA will hold the virtual workshop on June 9 to be chaired by iGA Chief Executive Mohammed Ali Al Qaed and with the wide participation of the finest experts, specialists and senior officials in eGovernment in the Arab countries and the Gulf Cooperation Council countries (GCC).

The high-level workshop will also host officials of the digital government and the information technology section in the GCC and a number of Arab countries, as well as a selection of speakers from senior information officials, Information and Communication Technology (ICT) experts, decision-makers, academics, United Nations representatives and government officials from all over the world.

The workshop comes from the premise of discussing ways to improve the measurement indicators in the United Nations e-Government Report, keeping pace with the continuous changes that the world is witnessing today and the rapid steps in the field of ICT, and its various effective uses by government and citizens in their daily lives. It aims to promote and develop a better understanding of what the United Nations eGovernment report targets, identify challenges related to eGovernment development indicators, and exchange knowledge between the GCC countries and the Arab countries participating with brief interventions.

This will contribute in strengthening the methodology of the United Nations while evaluating the eGovernments, and their successful experiences will be shared with countries around the world. The workshop also reflects the keenness of the participating countries to find effective ways to improve the public service and its provision in a manner that meets the needs of the beneficiaries.

It also involves them in the process of continuous improvement of countries in order to achieve sustainable development and to push for the inclusion of indicators for measuring the performance of eGovernments contained in the United Nations Report, in the national development strategies and its main performance indicators for various countries. This will ensure the advancement of levels of service provision, in order to achieve comprehensive digital transformation at all levels. The workshop will start with a series of presentations by United Nations and eGovernment and development experts. It will be followed by discussions on the indicators of the United Nations eGovernment Report, revolving around a set of important items.

They include the possibility of relying on the data entered to measure the indicators correctly and the adoption of measurement methods indicators by the United Nations, interpretation of the report’s findings, new international trends for digital government, and potential case studies from the GCC and other participating countries. The workshop’s final session will be devoted to presenting the recommendations that will be submitted to the UNDESA before presenting them to the United Nations team of experts.