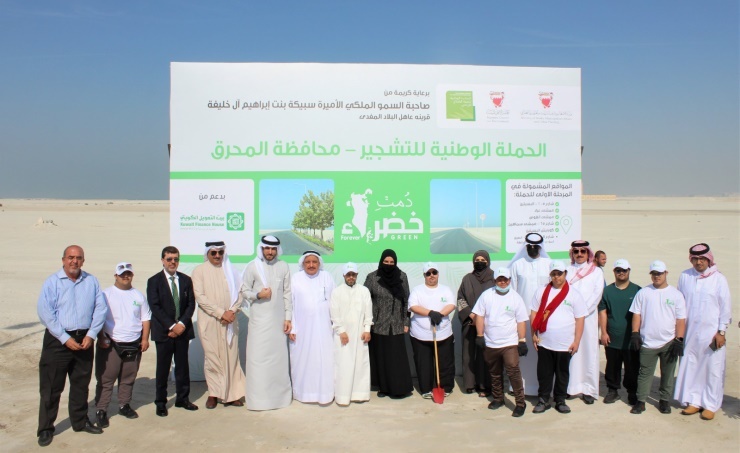 Bahrain : Busaiteen Corniche and Al Samaheej Walkway in Muharraq have become the latest sites to benefit from an ambitious nationwide campaign to ensure the expansion of the green zones in the Kingdom and active contributions to the fight against climate change.

The Forever Green campaign is being implemented by the National Initiative for Agricultural Development (NIAD) under the directives of HM King Hamad bin Isa Al Khalifa and the patronage of HRH Princess Sabeeka bint Ibrahim Al Khalifa, the Wife of HM the King and President of the NIAD Consultative Council.

The planting of trees at the corniche and the walkway was carried out by NIAD in cooperation with the Ministry of Works, Municipalities and Urban Affairs and the Supreme Council for Environment, and supported by Kuwait Finance House, the Fareed Bader Group of Companies and the Merchant House.

The private sector has been playing a prominent role in the campaign, driven by a strong community partnership to expand green zones and help tackle the effects of climate change while supporting government strategies to achieve sustainability and development in the agricultural sector.

NIAD Secretary General Shaikha Maram bint Isa Al Khalifa said she was particularly proud of the ongoing national efforts to boost the agricultural, food and environmental sector in the Kingdom and of the generous contributions of the private sector to support the campaign.

“The private sector has been instrumental in the success of the campaign and in supporting its goals, giving fine examples of productive partnership for a better environment,” she said.

“The generous contributions by Kuwait Finance House, the Fareed Bader Group of Companies and the Merchant House.

to green the Busaiteen Corniche and Al Samaheej Walkway clearly reflect the genuine care accorded to the private sector to support and strengthen the sustainability and development strategies of the agricultural sector and to highlight the beautiful features of the Kingdom by expanding the green areas in the Kingdom and maintaining its rich agricultural heritage.”

Alongside the Samaheej Walkway, 78 seedlings were planted over 400 meters, with support from Fareed Bader Group and the Merchant House Hotel.

At both ceremonies, the participants were briefed on the campaign goals and the sites that have been covered across the Kingdom and that have reached so far 15 in the first phase.

They were also briefed on the positive results achieved by enhancing the climate and flora in various regions in the Kingdom and their contribution to curbing the effects of climate change caused by increased carbon emissions, enhancing air quality and expanding green zones.