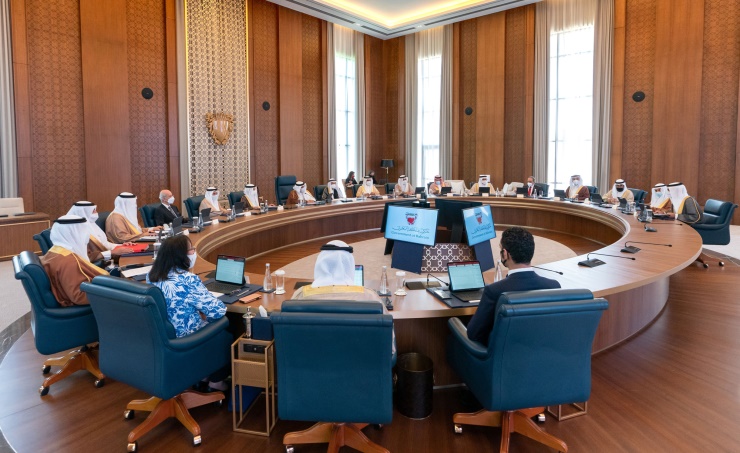 The Cabinet commended the meeting that took place between HM the King and HRH the Crown Prince and Prime Minister, in which HM the King emphasised the importance of further strengthening GCC ties and unity to advance the development of member countries.

The Cabinet noted HM the King’s statement that the “Al-Ula Declaration” had reaffirmed the commitment of GCC Member States to the goals of the GCC Charter, through integration and strengthened cooperation amongst the six GCC Arab nations. The Declaration reflects the aspirations of GCC citizens for a return to joint GCC cooperation, greater integration and cohesion.

The Cabinet emphasised the importance of mutual respect amongst the citizens of GCC member states and responsible media discourse to be compatible with the social values, Arab customs and traditions that consolidate the unity and common purpose of GCC citizens.

Then, the Cabinet extended its best wishes to HM the King, HRH the Crown Prince and Prime Minister, and the citizens and residents of Bahrain, as well as to the Arab and Islamic nations, on the occasion of the new Islamic Hijri year 1443 AH.

The Cabinet commended the Kingdom’s achievements in mitigating the impact of COVID-19, and extended its gratitude to Bahrain’s citizens and residents, for their responsibility in adhering to necessary precautionary measures. In this regard, the Cabinet noted the importance of continuing to responsibly follow these measures in support of Team Bahrain.

In relation to World Day Against Trafficking in Persons 2021, the Cabinet highlighted the Kingdom’s commitment to strengthening cooperation with the international community in tackling people trafficking, and expressed its thanks and appreciation for the active role played by the Ministry of Interior and responsible authorities.

The cabinet discussed a number of memorandums during the meeting with the following outcomes:

Firstly: The approval of the following memorandums:

1.           A Memorandum by the Ministerial Committee for Legal and Legislative Affairs regarding amending the provisions of the decree-law regarding medals, to create the Prince Salman bin Hamad Medal for Medical Merit.

2.           A Memorandum by the Ministerial Committee for Legal and Legislative Affairs regarding a draft resolution on financial regulations for government health institutions, aimed at balancing financial and accounting transactions and managing the cycle of revenues and expenditures within them.

3.           A Memorandum by the Ministerial Committee for Legal and Legislative Affairs on a draft resolution on employee regulations across government health institutions, which includes hiring and job specifications, as well as evaluating performance and training.

4.           A Memorandum by the Ministerial Committee for Financial and Economic Affairs and Fiscal Balance, regarding the Kingdom of Bahrain’s contribution in support of the international response to COVID-19 and the provision of vaccinations.

5.           A Memorandum by the Minister for Shura Council and the Council of Representatives Affairs regarding regulations aimed at enhancing cooperation with the Legislative Authority.

6.           A Memorandum by the Ministerial Committee for Legal and Legislative Affairs regarding the government’s response to a proposal submitted by the Council of Representatives.

1.           A Memorandum by HE the Minister of Labour and Social Development regarding labour market indicators for the first half of 2021. The report noted the outcomes of government initiatives to protect the labour market from the repercussions of the global pandemic, as well as the role of the National Employment Program (2.0) in providing sustainable employment opportunities for Bahraini citizens.

(i)           A report on a fire incident that occurred in Askar and the Ministry of Interior response.

(iii)         A report on the visit of the Republic of Sudan’s Minister of Foreign Affairs.

(iv)         A report on the visit of Islamic Republic of Pakistan’s Minister of Foreign Affairs.

(v)          A report on international exchange of visits between the Kingdom of Bahrain and various foreign delegations during August 2021.