During an interview with Bahrain News Agency… Pakistani Foreign Minister: *Bahraini-Pakistani JMC consisted of a comprehensive review of bilateral ties and explored means to deepen them further* 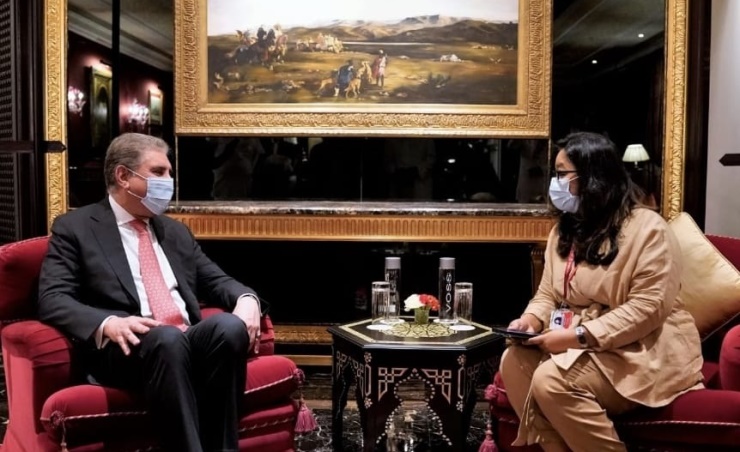 Bahrain :  The Minister of Foreign Affairs of Pakistan, His Excellency Shah Mahmood Qureshi stated that the Kingdom of Bahrain and Islamic Republic of Pakistan enjoy excellent bilateral ties and will continue to explore avenues to further enhance cooperation in areas of mutual interest between the two brotherly countries.

In an interview with Bahrain News Agency (BNA), at the end of his visit to the Kingdom, the Minister reviewed means of bilateral relations between Bahrain  and Pakistan, as well as an overview of his visit to the Kingdom, where the Minister met with His Majesty King Hamad bin Isa Al Khalifa, His Royal Highness Prince Salman bin Hamad Al Khalifa, the Crown Prince and Prime Minister, and Interior Minister General Shaikh Rashid bin Abdullah Al Khalifa. He also chaired the 2nd Session of the Bahrain-Pakistan Joint Ministerial Commission (JMC) alongside the Minister of Foreign Affairs, His Excellency Dr. Abdullatif bin Rashid Al Zayani.

The Minister noted that the JMC consisted of a comprehensive review of Bahraini- Pakistani bilateral ties and explored means to deepen them further, adding that there are 44 agreements and MoUs which had been signed by the two countries. JMC also reviewed setting up a mechanism to follow up on progress in activating those agreements.

The Pakistani Foreign Minister said the meeting also discussed bilateral trade and the huge potential for forging new economic partnerships and investment opportunities between the two countries, pointing out the incentives offered through the newly established economic zones being set up along the China Pakistan Economic Corridor (CPEC).

The Minister noted it can be beneficial to repatriate 100 percent of capital to obtain a grace period from taxes as well. He added that there are tax and customs duty exemptions for capital inflow and imports of machinery and other goods, which constitute important investment attractions, noting that there are many opportunities for Pakistani investors to invest in the Kingdom of Bahrain.

The Pakistani Foreign Minister indicated that there is a wide scope for cooperation with the Kingdom of Bahrain in the areas of food security, industrial growth, agriculture and education, highlighting that the Kingdom can similarly contribute in many ways to the oil and mineral sectors of Pakistan, where Bahrain has an advanced aluminum production plant, which is a requirement for the evolving construction industry in Pakistan.

The Minister also touched on cooperation in the field of defense and security between both countries, which is also continuously evolving.

Speaking on the Pakistani community in Bahrain, the Minister expressed gratitude for the trust and support it receives, pointing out that they have contributed to the economic development of Bahrain.

In this regard, he also spoke highly of the way the Pakistani workforce, as well as other communities, was looked after by the Government of Bahrain during the COVID-19 pandemic by providing free vaccines and medical care and repatriation options as well as other forms of support during this unprecedented global challenge.

Talking about the regional landscape, the Minister stated that Bahrain is a key member of the Gulf Cooperation Council (GCC) and Pakistan values its excellent relations with this regional bloc of strategic importance.

He also expressed his admiration towards how the Kingdom of Bahrain, led by His Majesty the King, promotes a culture of tolerance and is keen on educating the youth on these values.

The Minister also pointed out that the meetings during his visit discussed the challenges of extremism, terrorism and narcotics and the need to address them by forming a system of regional efforts.

The Minister highlighted the excellent political and diplomatic relations between the two countries, where support is extended to each other on an international level, commending the support extended by Bahrain during the Financial Action Task Force (FATF) meetings.

The Minister concluded by affirming the solid foundations and common values of Bahraini-Pakistan relations, showcasing that his visit was fruitful and successful, and will lead to further qualitative cooperation in the future between the two brotherly countries.

He added that he looks forward to visiting Bahrain next November, following the invitation of the Minister of Foreign Affairs to participate in the IISS Manama Dialogue 2021, which is considered the biggest security summit in the region.