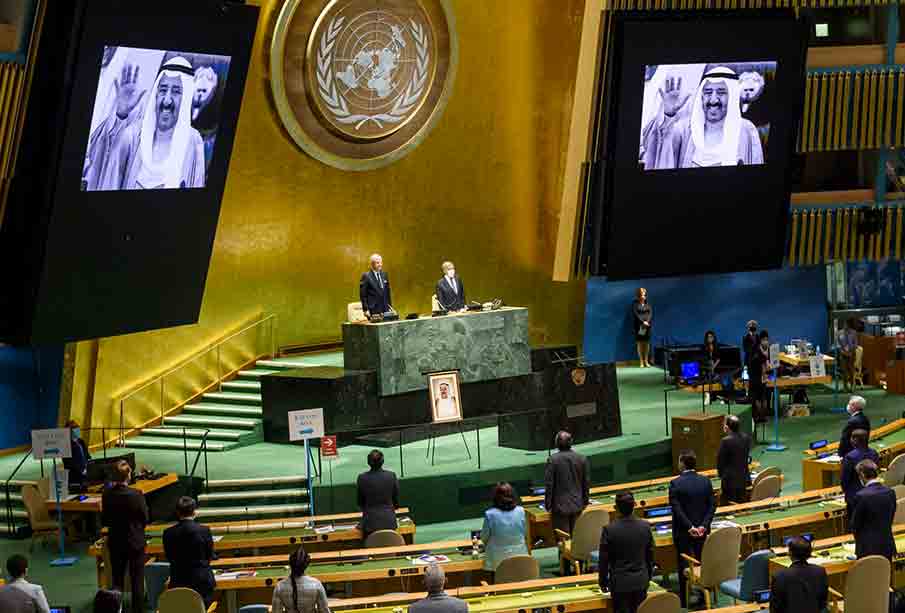 Delegates from all over the world took a moment of silence during the session to mourn the loss of the ‘Humanitarian Leader’, a title the late Emir was awarded with in 2014 by then Secretary General Ban-Ki-moon.

Volkan Bozki, the President of the General Assembly, said in a tweet, “Under [Sheikh Sabah’s] leadership, Kuwait grew to be a symbol of peace and cooperation” and pointed out that the late Emir was known for his commitment to peace and dialogue.

Serving as the Foreign Minister and then Emir of Kuwait, the late Sheikh Sabah gained worldwide recognition, including at the UN, and has been dubbed the ‘dean of Arab diplomacy’.

The Ambassador of Kuwait to the United Nations, Mansour Al Otaibi said, during a speech in front of the UN General Assembly, that history will commemorate the late Emir’s achievements and contributions and his legacy will remain as he has laid a solid foundation for Kuwait’s foreign and diplomatic policy.

Two days after the 91-year-old Emir passed away, the UN flag at the United Nations headquarters in New York, flew at half- mourn to mourn the loss of Sheikh Sabah.

The UN Secretary-General, Antonio Guterres, described the late Emir as a “distinguished statesman and an outstanding humanitarian who contributed to building bridges of understanding in the Gulf region and beyond. In so doing, Sheikh Sabah Al Ahmed earned international recognition for his wisdom, generosity and achievements in State-building and preventive diplomacy.”

A notable leader, he was held in high esteem by the people of Kuwait, “as a close friend of the United Nations, His Highness always sought to strengthen relations for the shared goal of sustaining peace and stability in the region and around the world.” (Gulf News)