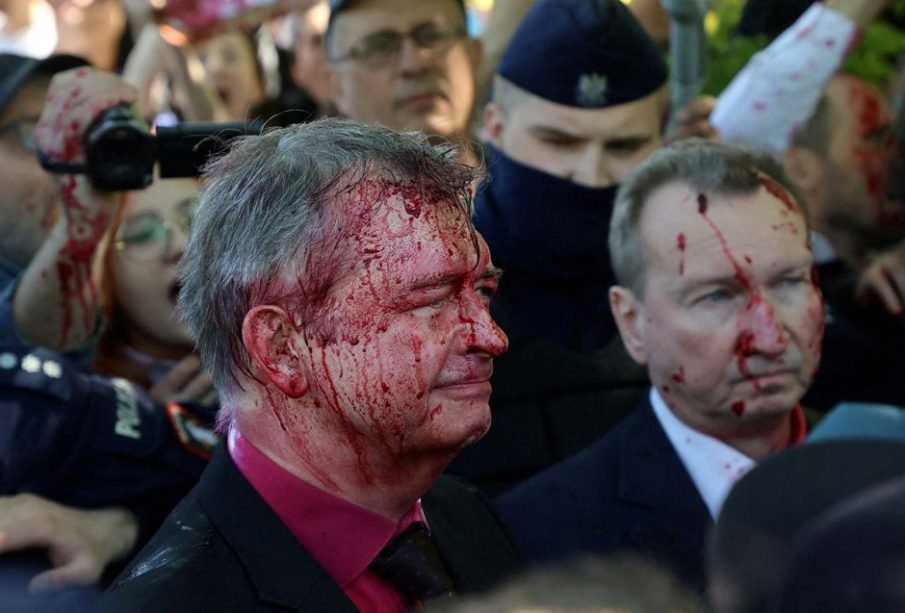 Russian diplomat Sergiy Andreev was feeling unwelcome on the streets of Warsaw even before protesters doused him with red liquid thrown in his face at short range this week.

Soon after Russia’s invasion of Ukraine on Feb. 24, Andreev, who is Moscow’s ambassador in Poland, found the embassy bank accounts had been frozen. Attempts to meet with Polish officials for any level of diplomatic discussion were impossible, he said.

“We are practically isolated,” he told Reuters, before the paint incident on Monday, which has prompted Russia to demand an apology from Poland or risk facing unspecified further steps.

Across Europe’s capitals, Russian diplomats are getting the cold shoulder, ranging from diplomatic expulsions by governments, to protests by individual citizens, and service denials by companies.

European Union governments have expelled at least 400 Russian diplomats and support staff. Warsaw has seized a building linked to the Russian embassy, and Oslo renamed a street in front of the Russian mission “Ukraine Square.”

Russia’s 10-week bombardment of Ukraine has killed thousands, driven over a quarter of the population from their homes and flattened towns. Europeans widely see it as unprovoked aggression by President Vladimir Putin, who says what he calls a special military operation was launched to defend Russia.

The diplomats’ tribulations are not comparable to the destruction of the war or the broader Western response, but they are a conspicuous example of the depth of feeling against the invasion, and have hit home in Moscow.

Public protests have prompted Russia’s foreign ministry to warn diplomats to think twice when they venture out, after embassies were defaced by red paint in Rome, Sofia and Prague. In London, protesters piled cookware and appliances in front of Russia’s mission in April, in reference to reports of Russian looting in Ukraine.

“There are attacks, practically terrorist acts against our institutions and against the physical security of diplomats,” Russian Foreign Minister Sergei Lavrov told Rossiya 24 television.

“Now we do not recommend they go out” alone, said Lavrov, calling the anti-Russian atmosphere stoked by the West discriminatory.