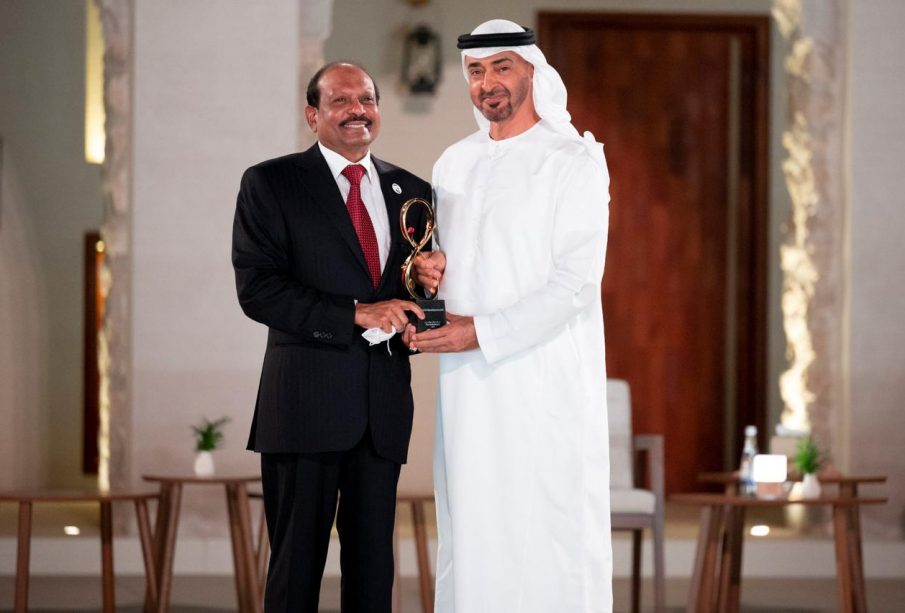 The prestigious Abu Dhabi Award was given to Yusufali for his Outstanding Contribution to Abu Dhabi’s Business, Industry and support to various philanthropical initiatives.

“A very proud and emotional moment in my life. I am really overwhelmed and humbled to receive such a great honour from Abu Dhabi where I have been living for the past 47 years”, said the Kerala born Yusuffali after receiving the honour.

“It was on December 31, 1973, I arrived in the UAE with new dreams and hopes. I have reached here after seeing many ups and downs and various challenges and I take this opportunity to extend my deepest gratitude to the visionary leadership of this great country especially His Highness Sheikh Mohammed bin Zayed Al Nahyan, Crown Prince of Abu Dhabi”.

“Whatever I am today is because of the support and prayers of the rulers of the great country of and the expatriate community that includes my fellow Indian brothers and sisters and I dedicate this honour to them”, added Yusuffali.

Yusuffali is the only Indian along with other 11 prominent personalities that include 9 UAE Nationals to receive this great honor this year. The Abu Dhabi Awards is a Government of Abu Dhabi initiative that recognizes and honours individuals who have selflessly dedicated themselves to support and contribute to the development of the Emirate of Abu Dhabi.

AWARDS:
He has received numerous awards, including the Pravasi Bharatiya Samman in 2005, the Padma Shri in 2008, the Order of the King of Bahrain in 2014, and British Queen’s Award in 2017. In addition, he is also the first expatriate to get permanent residency visa by UAE and Saudi Arabia.

PHILANTHROPIST:
Being one of the most generous philanthropists, Yusuffali is always in the forefront when it comes to giving back to his home country in the fields of healthcare, education and community welfare. During the current Covid period, Yusuffali has so far contributed more than Rs. 50 crores which includes 25 crores to PM Cares Fund, 10 crores to Kerala CM relief fund, Rs. 5 crores to UP CM relief fund, 1 crore to Haryana CM relief fund and to various social cultural organizations in the middle east that provided help and assistance to Indians in distress.

Abu Dhabi based Lulu Group that owns Lulu Hypermarkets and shopping malls is one of the top retailers in the Middle East and North African region (MENA). It has more than 200 Hypermarkets and Supermarkets the Gulf countries, Egypt, Indonesia, Malaysia, India and employs over 58,000 people from various countries and have logistics centers in USA, UK, Spain, South Africa, Philippines, Thailand etc.

The Group which was founded by Yusuffali is also expanding In India with new lulu malls and hypermarkets scheduled to be opened In Lucknow, Bengaluru, Trivandrum later this year. It is also one of the largest exporters of fruits and vegetables from India and exports Kashmiri apples and other products from Jammu and Kashmir on a large scale to support Indian Governments’ push to revive Kashmir Valley’s economy.

Apart from the retail segment, the Group also have hospitality presence and owns premium hotels like London’s Iconic Great Scotland Yard and the Waldorf Astoria Edinburgh – The Caledonian in Scotland and the Grand Hyatt and Marriot Hotels at Kochi in Kerala.