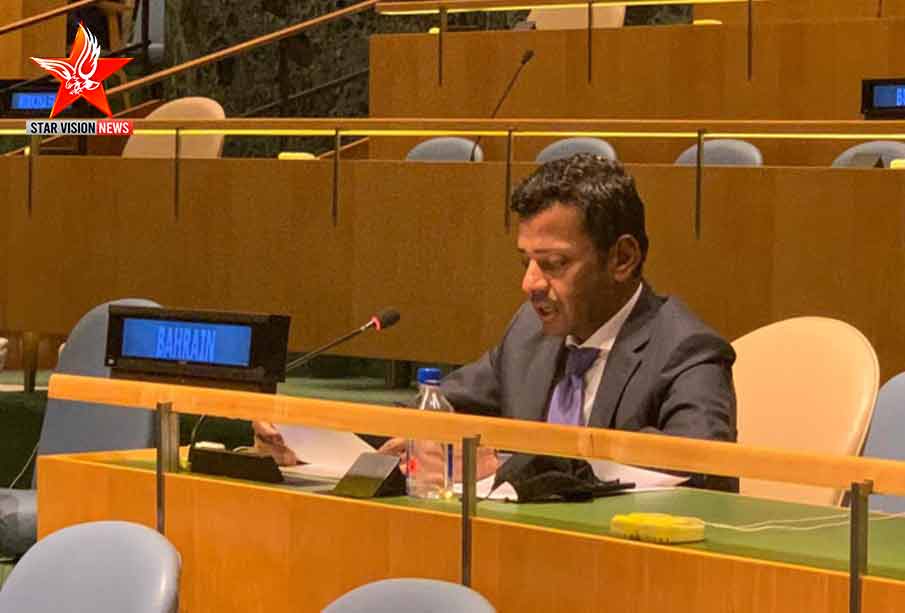 The Permanent Representative of the Kingdom of Bahrain to the United Nations in New York, Ambassador Jamal Fares Alrowaiei, stressed the importance of making the Middle East a zone free of weapons of mass destruction, especially nuclear weapons, in implementation of the decision of the 1995 Non-Proliferation Treaty Review Conference.

He stressed the need to subject all nuclear facilities in the region to IAEA safeguards and controls, noting the importance of acceding the Treaty on the Non-Proliferation of Nuclear Weapons.

This came in the speech delivered by the Ambassador during the general debate session of the Committee on Disarmament and International Security of the United Nations General Assembly.

He noted that given the strategic importance of the Arab Gulf region at the global level, it is important for it to be free of nuclear weapons and other weapons of mass destruction.

He pointed out the concern of the IAEA regarding Iran exceeding the limits of the enriched uranium stockpile permitted under the nuclear agreement signed in 2015.

He called on Iran to cooperate with IAEA with complete transparency, to subject all its nuclear installations and activities to IAEA control, and to fulfill its obligations to the Agency.

He also renewed the Kingdom of Bahrain’s call to the international community to adopt a unified global strategy to curb the proliferation of nuclear weapons and weapons of mass destruction through an effective mechanism to disarm these weapons globally and regionally.

In the same context, he affirmed the inalienable right of states to benefit from the multiple peaceful fields of nuclear energy applications as long as they comply with the comprehensive safeguards of the International Atomic Energy Agency, and the importance of achieving more benefit in the exchange of nuclear knowledge and technologies between industrialized and developing countries.

The Ambassador also stressed that outer space is a common property that should not be exploited in a way that threatens international peace and security.

He pointed out the need to adhere to the relevant international legal agreements, which lay the foundations in order to prevent the weaponization of outer space and to ensure its continued use for peaceful purposes.