A record 6.6 million seek US jobless aid as layoffs mount 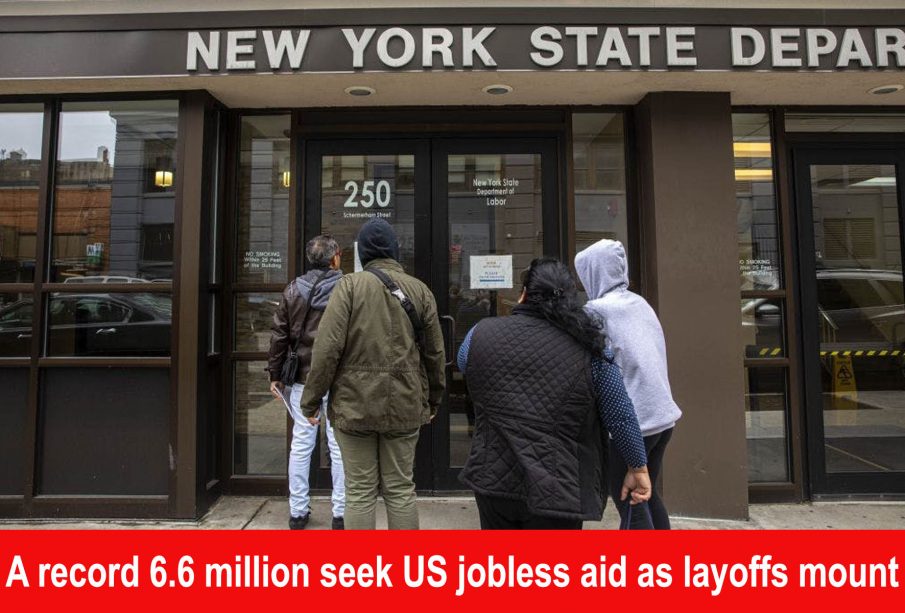 More than 6.6 million Americans applied for unemployment benefits last week — doubling a record high set just one week earlier — a sign that layoffs are accelerating amid the coronavirus.

The report on Thursday from the Labour Department showed that job cuts are mounting against the backdrop of economies in the United States and abroad that have almost certainly sunk into a severe recession as businesses close across the world.

Applications for unemployment benefits generally reflect the pace of layoffs. Combined with last week’s report that 3.3 million people sought unemployment aid two weeks ago, the U.S. economy has now suffered nearly 10 million layoffs in just the past several weeks — far exceeding the figure for any corresponding period on record.

“This kind of upending of the labor market in such a short time is unheard of,” said Heidi Shierholz, an economist at the Economic Policy Institute, a progressive think tank.

Some of last week’s jobless claims are likely delayed filings from the previous week when state offices that handle unemployment benefits were overwhelmed by a surge of online and telephone claims. Yet many of those offices are still struggling to process all the claims they have received. As a result, applications for benefits will likely remain extraordinarily high over the coming weeks.

The magnitude of the layoffs has led many economists to envision as many as 20 million lost jobs by the end of April. That would be more than double the 8.7 million jobs lost during the Great Recession. The unemployment rate could spike to as high as 15% this month, above the previous record of 10.8% set during a deep recession in 1982.

Employers are slashing their payrolls to try to stay afloat because their revenue has collapsed, especially at restaurants, hotels, gyms, movie theaters and other venues that depend on face-to-face interaction. Auto sales have sunk, and factories have closed.

More than two-thirds of the U.S. population is under stay-at-home orders, imposed by most U.S. states. That has intensified pressure on businesses, most of which face rent, loans and other bills that must be paid.

Requests for jobless aid soared in all 50 states, showing that layoffs have spread nationwide. In California, nearly 900,000 people sought benefits last week, almost four times the previous week’s figure, and equivalent to 5% of the state’s workforce.

The White House and Congress expanded the unemployment benefits system in last week’s $2.2 trillion economic rescue package. That legislation added $600 a week in jobless aid, on top of what recipients receive from their states. This will enable many lower-income workers to manage their expenses and even increase their purchasing power and support the economy.