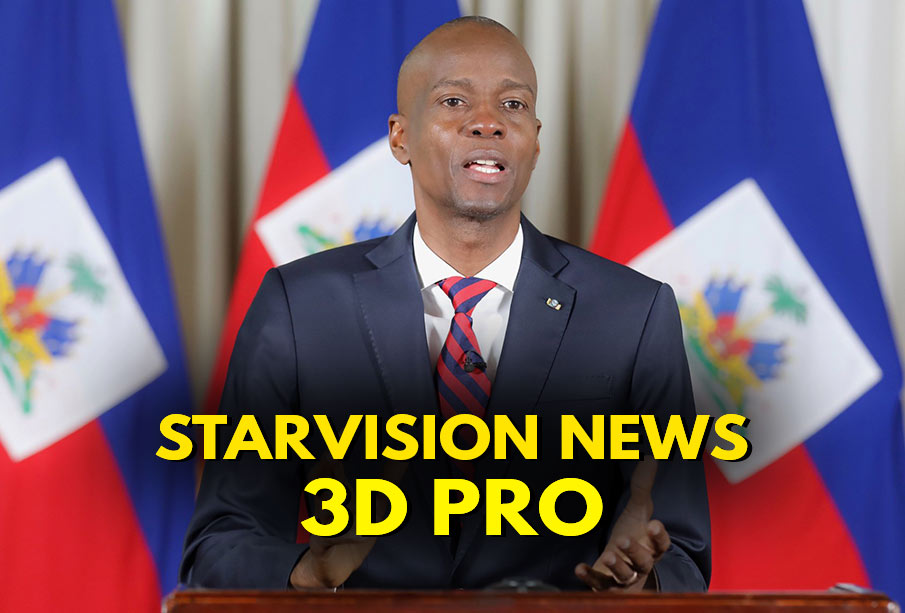 Haiti’s President Jovenel Moïse has been killed and his wife injured in an attack on their home in the nation’s capital, Port-au-Prince. Unidentified gunmen stormed the property at 01:00 local time (05:00 GMT), interim PM Claude Joseph said. He has called for calm and declared a state of emergency nationwide.

Mr Joseph called the shooting of the president a “heinous, inhuman and barbaric act”, saying the attackers were “foreigners who spoke English and Spanish”. Haiti’s official languages are Creole and French.

Mr Moïse had led Haiti, one of the poorest nations in the world, since 2017. The nation’s recent history has been plagued by coups, political instability and widespread gang violence.

Some reports spoke of men dressed in black carrying high-powered weapons who may have pretended to be part of a US drug enforcement operation, although no official details have been given. Haiti’s ambassador to the US, Bocchit Edmond, said there was “no way” it was US drugs agents. He believed the attack was carried out by “professional mercenaries”.

Federer knocked out in quarter-finals

Roger Federer’s bid for a ninth Wimbledon title is over after he was stunned in straight sets by Hubert Hurkacz in the quarter-finals. The Swiss lost 6-3 7-6 (7-4) 6-0 to the 14th seeded Pole, who reached his first Grand Slam semi-final. It is the first time 20-time major champion Federer has lost a set to love at the All England Club.

“It’s super special for me,” said Hurkacz, only the second Polish man to reach the semi-finals at a Grand Slam. “Playing here and the special things [Federer] has done here, it’s a dream come true.”

Hurkacz, who was six when Federer won his first title at SW19, is the first player to win a set to love against the Swiss since Rafael Nadal in the 2008 French Open final. Federer, at 39 years and 337 days, had been bidding to become the oldest man to reach the Wimbledon semi-finals in the Open era.

But defeat marked his first straight-set loss at Wimbledon in 19 years and left pundits and fans wondering whether this could turn out to be his final appearance at the grass-court Grand Slam. Federer himself said he “does not know” if he will play at Wimbledon again.

HH Shaikh Isa noted that Bahrain’s educational system has continued to develop despite the challenges of COVID-19, with the support of HM King Hamad bin Isa Al Khalifa and HRH Prince Salman bin Hamad Al Khalifa, the Crown Prince and Prime Minister. HH Shaikh Isa congratulated the class of 2021 for their accomplishments and expressed appreciation to the Ministry of Education for ensuring continuity of education during exceptional times.

HH Shaikh Isa received a briefing on the progress of scholarship recipients, as well as a progress report on the 246 scholarships offered to students attending 15 local and 4 international universities from 2013 through to 2021. For his part, H.E. Dr. Majid bin Ali Al-Nuaimi, Minister of Education and Vice Chairman of the Isa bin Salman Charity Educational Endowment, extended the gratitude of the scholarship recipients to HH Shaikh Isa for the support offered.

Carlos Reutemann, a leading Formula 1 driver in the 1970s and 1980s and later a senior politician in Argentina for three decades, has died aged 79. As a racing driver he won 12 Grands Prix, came close to the world championship with Williams in 1981. He was known for his huge talent but enigmatic character.

Upon retiring abruptly in 1982, Reutemann went into politics and had two terms as governor of his native Santa Fe province. He was a senator for the Justicialist Party from 2003 until his death.

Reutemann rose to prominence as a racing driver, entering Formula 1 in 1972 at the relatively late age of 29 and remaining among the top names in the sport throughout his decade of involvement. He drove 146 races for the Brabham, Lotus, Ferrari and Williams teams and was regarded as one of the fastest drivers of his day.

The Bahrain Journalists’ Association (BJA) has announced that the date of the elections of its Board of Directors has not been changed, as some posts on social media networks say, confirming that they will be held on July 17 at the headquarters of the Bahrain Society of Engineers, as announced earlier. BJA called on all those wishing to run for its board to contact its relevant officials to finalise the candidacy procedures before July 14 at 06:00 pm.

BJA explained that the term of the current board had expired in January 2021, and that the elections were postponed by six months due to the exceptional circumstances created by the novel Coronavirus, noting that the Ministry of Information Affairs agreed to hold the elections after the end of six months, and that all procedures and arrangements are underway to hold the General Assembly to elect board members later this month.

The Deputy Prime Minister, the Deputy patron of the celebration, delivered a speech in which he expressed thanks and appreciation to HRH the Crown Prince and Prime Minister for patronizing the award and supporting the national press which plays a constructive role in boosting the comprehensive development achievements brought about under the leadership of His Majesty King Hamad bin Isa Al Khalifa.

The Deputy Prime Minister conveyed to the attendees the greetings of HRH Prince Salman bin Hamad Al Khalifa, the Crown Prince and Prime Minister, and his appreciation of the journalists’ remarkable contribution to the national efforts he is leading in various areas. He recalled the role of late HRH Prince Khalifa bin Salman Al Khalifa in patronizing the previous edition of the award and supporting free and responsible journalism.

The Deputy Prime Minister underscored the role of the national press in supporting the government action plan and promoting sustainable development through conscious commitment to national unity and promotion of the Arab cultural identity, tolerance and moderation.

Addressing the attendees of the virtual celebration, Information Minister Ali bin Mohammed Al Romaihi extended sincere thanks and appreciation to HRH the Crown Prince and Prime Minister for patronizing the award and for his unflinching support to responsible freedom of expression and the enlightened national press. He also thanked the Deputy Prime Minister for attending the celebration.

The Information Minister paid tribute to the press and media community for its commitment to expressing credibly, honestly and transparently the conscience of the nation, its unity and Arab Cultural identity. He also praised the role of the national media and journalism in highlighting the kingdom’s achievements under the comprehensive development march led by HM the King.

The Information Minister praised the efforts of the jury in evaluating more than 300 journalistic works and choosing the best of them in an objective, impartial and transparent way. He stressed that Bahrain’s press, thanks to the unlimited support of HM the King, is going ahead with its pivotal role as an active partner in maintaining national security and stability and boosting achievements.

He also affirmed the key role of the national press in confronting the suspicious and hostile campaigns targeting the kingdom’s security, stability and identity. He noted the role of the press and media in consolidating Bahrain’s standing as a model of tolerance, creativity and responsible media freedom.

For her part, Chairperson of Bahrain Journalists Association (BJA), Ahdiya Ahmed, voiced appreciation of the press community of HRH the Crown Prince and Prime Minister’s patronage of the award aimed at honouring creative journalists and writers.

She described the award as an embodiment of HRH the Crown Prince and Prime Minister’s unwavering support to the national media and press. She also thanked the Information Minister for his efforts to organise the award, congratulating the winners and journalistic institutions on their achievements and participation.

The Bahrain Defense Force (BDF) held a graduation ceremony for one of the specialized courses for officers. The ceremony included a brief of the course and the stages of training, including theoretical materials and practical applications, in which a number of officers of the Ministry of Interior and the National Guard participated.

Assistant Chief of Staff for Human Resources, Major-General Shaikh Ali bin Rashid Al Khalifa distributed certificates to the graduates and prizes to the outstanding. The graduation ceremony was attended by a number of senior BDF officers.