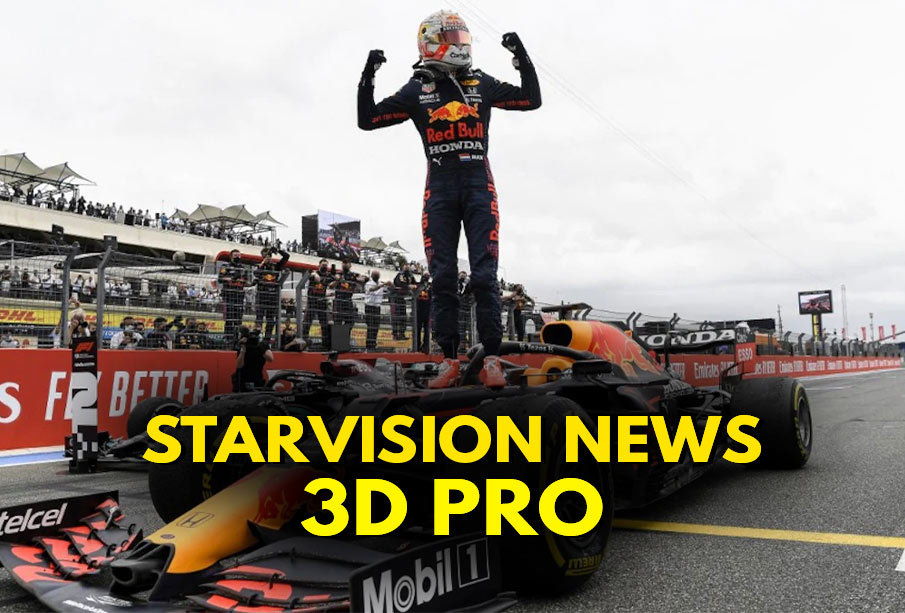 Red Bull took their third consecutive win of the season at a cracking French Grand Prix courtesy of Max Verstappen, who passed Lewis Hamilton with two laps to go to claim the thirteenth victory of his career, Hamilton finishing second as the second Red Bull of Sergio Perez completed the podium.

In a mirror of the Spanish Grand Prix – when Mercedes out-strategised Red Bull to claim the victory – Verstappen stopped twice to Hamilton’s one-stop, with the Dutchman then using his fresher tyres to close up to the Mercedes, passing on Lap 52 of 53 to check out for his third win of the year. It more than made up for Verstappen losing out to Hamilton from pole at the race start, Verstappen taking the win as well as the extra point for fastest lap – with the result also marking the first time Red Bull have won three races on the bounce in the turbo-hybrid era.

Behind, Valtteri Bottas ended up a disgruntled fourth behind Perez, having complained to Mercedes that he was ignored when he advised them to switch to a two-stop, as Red Bull did with Verstappen.

Behind the leading four, a superb day for McLaren saw Lando Norris finish a fine fifth, ahead of team mate Daniel Ricciardo, who enjoyed arguably his best race of the year to take sixth. AlphaTauri’s Pierre Gasly demonstrated strong race pace to take his best ever finish in his home Grand Prix with P7, ahead of the Alpine of Fernando Alonso.

Sebastian Vettel made a long first stint work to take his third consecutive points finish with ninth, while team mate Lance Stroll completed the top 10 thanks to a late pass on the Ferrari of Carlos Sainz – capping off a bad day for the Scuderia, who lacked race pace at Paul Ricard, with Sainz ending up 11th as Leclerc could do no better than P16.

But after a thriller of a French Grand Prix, it was all about Verstappen, who took an decisive strike at the start of the first triple header of what’s turning into a phenomenal 2021 season, extending his lead over Hamilton in the drivers’ standings to 12 points.

With walled camps and tougher border controls, Greece is hardening its approach ahead of summer when migrant arrivals pick up, defying criticism from aid groups and saying it has little choice given a lack of support from the rest of Europe. The squalid conditions facing many asylum-seekers were laid bare last year when a fire devastated the sprawling Moria camp on Lesbos, and Greece has denied repeated accusations that its coast guard vessels have pushed back migrant boats as they entered Greek waters from Turkey.

Greece was the frontline of Europe’s migration crisis in 2015, when a million refugees from Syria, Iraq and Afghanistan landed. The numbers have slowed sharply since, but Greece says it is still left shouldering much of the burden. Outside Athens in the camp of Ritsona, signs of the stricter policy are visible. Concrete-fenced, it resembles a small walled town, with makeshift grocery stores, a butcher and a cafe blasting Arabic music. Athens says the measures will make camps safer but aid groups say containment policies hurt people already traumatized by war and conflict. The Council of Europe’s Human Rights Commissioner has urged Greece to reconsider.

The Ministry of Health has called on citizens and residents aged above 50, and who had taken both doses of the Chinese vaccine Sinopharm before three months, to register for a COVID-19 vaccine booster dose from Pfizer-BioNTech.

The Health Minister noted that the logo of the “BeAware” application will automatically turn yellow three months after taking the second shot of the Sinopharm vaccine to alert the individuals of the need to take the booster jab, adding that the logo will regain its green colour after receiving the booster dose.

The Ministry stressed the safety and great effectiveness of the vaccinations, as well as their contribution to alleviating the symptoms associated with the infection with the virus, noting that the vaccination reduces the rate of transmission of the virus to others compared to those who are not vaccinated, and is effective in protecting and building community immunity. It is noteworthy that Bahrain has intensified its national vaccination campaign in order to preserve public health and safety.

It also continues its awareness campaigns aimed at increasing caution and ensuring full compliance with the precautionary and preventive measures recommended by the competent authorities in order to preserve the safety of all, eliminate the pandemic and ensure return to normalcy as soon as possible.

Interior Minister, General Shaikh Rashid bin Abdullah Al Khalifa, today received Capital Governor, Shaikh Hisham bin Abdulrahman Al Khalifa, on the international accomplishment of naming Manama as a “Healthy City 2021” by the World Health Organisation (WHO) Regional Office for the Eastern Mediterranean. It is the first capital city across the Middle East to have received such an honour.

The minister hailed the care of His Majesty King Hamad bin Isa Al Khalifa and the keenness of His Royal Highness Prince Salman bin Hamad Al Khalifa, the Crown Prince and Prime Minister, to provide the best services to citizens and residents in the Kingdom. He said that the milestone reflects sustainable development in the health, social and economic sectors, as well as Bahrain’s commitment to international standards and global health reinforcement and awareness directives.

The Interior Minister valued the role of the Capital Governorate in launching initiatives and programmes to enhance people’s participation in tackling social issues. He also hailed the role of the governor in achieving the milestone. He expressed thanks and appreciation to the Health Ministry for its dedication and efforts to invest in a healthy environment and urban development, along with enhancing the quality of life. The Capital Governor expressed thanks and appreciation to the Interior Minister for his support to all the governorate’s plans and programmes.

China has administered more than 1 billion Covid-19 vaccine doses, an astonishing milestone that comes as the country rolls out an unrivaled inoculation drive. A total of 1,010,489,000 doses have been given as of Saturday, China’s National Health Commission (NHC) said in a statement. Those doses are almost 40% of the 2.5 billion shots administered globally.

The NHC said 100 million doses were given in the five days up to and including Saturday, according to state media outlet Xinhua. The 1 billion number is all the more remarkable given that China’s rollout had a stuttering start.

China only reached its first million administered doses on March 27 — two weeks behind the US. But the pace picked up significantly in May, with more than 500 million shots given over the past month, according to data from the NHC.

Public Health Director, Dr. Najat Abu Al-Fateh, has affirmed the important role played by the citizens and residents in supporting the national efforts to curb the spread of the novel Coronavirus, praising their responsible commitment during the past period, which contributed to reducing the number of active cases.

Dr. Abu Al-Fateh called upon everyone to continue supporting the tremendous efforts exerted by the National Medical Taskforce for Combating Coronavirus and the medical and nursing staff to ensure the success of the fight against the pandemic, urging concerted and collective efforts by everyone to achieve the forecast goals.

She called for the need to continue commitment to the precautionary measures, including social distancing, wearing face masks, using sanitisers and washing hands regularly. She stressed that family gatherings should be restricted to the members living in the same house, calling for the need to avoid going out, unless necessary. She also affirmed that full compliance with the recommendations of the competent authorities is the best means to reduce infections and protect public health and safety. She extended thanks and gratitude to individuals who play their role in protecting themselves, their community and their country’s gains, emphasising that cooperation among the health authorities, the citizens and residents is the best means to eliminate the pandemic.

Bahrain’s Education Minister, Dr. Majid bin Ali Al Nuaimi, received Education Ministry Undersecretary for Policies and Strategie, Nawal Ibrahim Al Khater, and Bahrain Training Institute (BTI) Director General, Diana Faisal Sarhan, on the occasion of the issuance of a Royal Decree appointing them to their posts within the framework of the new organigram of the Education Ministry.

Air Arabia has also introduced free COVID-19 insurance coverage, which is automatically included as part of the booking and no additional documents are required from passengers.