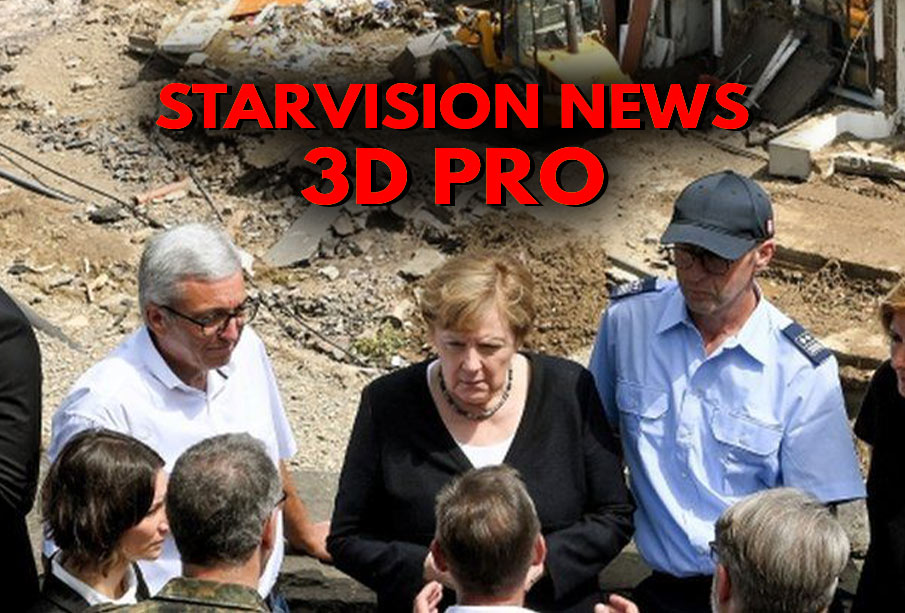 German Chancellor Angela Merkel described the flooding that has devastated parts of Europe as “terrifying” on Sunday after the death toll across the region rose to 188 and a district of Bavaria was battered by the extreme weather. Merkel promised swift financial aid after visiting one of the areas worst affected by the record rainfall and floods that have killed at least 157 in Germany alone in recent days, in the country’s worst natural disaster in almost six decades.

She also said governments would have to get better and faster in their efforts to tackle the impact of climate change only days after Europe outlined a package of steps towards “net zero” emissions by the middle of the century. “It is terrifying,” she told residents of the small town of Adenau in the state of Rhineland-Palatinate. “The German language can barely describe the devastation that’s taken place.”

As efforts continued to track down missing people, the devastation continued on Sunday when a district of Bavaria, southern Germany, was hit by flash floods that killed at least one person. About 110 people have been killed in the worst-hit Ahrweiler district south of Cologne. In North Rhine-Westphalia at least 46 people have died. The death toll in Belgium climbed to 31 on Sunday.

British Prime Minister Boris Johnson and finance minister Rishi Sunak will both self-isolate in line with national guidance, abandoning heavily criticised plans to take part in a pilot scheme that would have allowed them to continue working. The U-turn comes a day after health minister Sajid Javid said he had tested positive for COVID-19 and at a time when the government’s coronavirus response is under intense scrutiny.

Almost all remaining restrictions in England will be lifted on Monday despite a surge in infections as ministers put their faith in the advanced vaccine programme. Cases are rising by more than 50,000 a day and hundreds of thousands of Britons are being asked to self isolate for 10 days, causing havoc for employers and parents, prompting train cancellations and forcing some businesses to close their doors.

The government announced at 0700 GMT that Johnson and Sunak had been exposed to a person with COVID-19 and would take part in a trial scheme that allowed them to keep working instead of self-isolating. But less than three hours later that decision had been reversed after a flurry of criticism from voters, political opponents and business owners.

Bahrain exports $2.5 billion worth of products of national origins during Q2 2021

Bahrain’s value of imports increased by 7%, reaching BD1.249 billion during the second quarter of 2021 compared with BD1.168 billion for the same quarter the previous year, an official report has said. The top 10 countries accounted for 69% of the value of imports, with the remaining countries accounting for 31%, the Information & eGovernment Authority (iGA) said its foreign trade report of the second quarter of 2021, encompassing data on the balance of trade, imports, exports (national origin), and re-exports.

According to the report, Brazil ranked first when it came to imports to Bahrain, with a total of 181 million, China was second with BD159 million, and Saudi Arabia third with BD85million. Non-agglomerated iron ores and concentrates as the top product imported into Bahrain with a total value of BD224 million, while aluminum oxide was second with BD79 million, and four-wheel drive cars third with BD41 million. The value of exports of national origin increased by 75% to BD943 million during the second quarter of 2021, compared with BD540 million for the same quarter of the previous year. the top 10 countries in terms of the value of exports of national origin purchased from Bahrain accounted for 71% of the total value, with the remaining countries accounting for 29%.

Saudi Arabia ranked first among countries receiving Bahraini exports of national origin, importing BD167 million from the Kingdom. UAE was second with BD127 million and USA third with BD88 million. Agglomerated iron ores and concentrates as the top products exported during second quarter 2021 with BD251 million, unwrought aluminum alloys were second with a value of BD201 million, and semi-finished iron and steel third with BD53 million. The total value of re-exports increased by 15% to reach BD164 million in the second quarter of 2021, compared with BD143 million for the same quarter of the previous year.

The top 10 countries accounted for 86% of the re-exported value, while the remaining countries accounted for 14%. The UAE ranked first with BD50 million, Saudi Arabia second with BD42 million, and Singapore third with BD14 million. Four-wheel drive cars emerged as the top product re-exported from Bahrain with BD21 million, gold ingots came in second place with BD19 million, and parts for aircraft engines third with BD14 million. The trade balance, the difference between exports and imports, recorded a deficit totaling BD141 million during the second quarter of 2021 compared with BD485 million for the same quarter of the previous year, a 71% improvement of the trade balance.

His Majesty King Hamad bin Isa Al Khalifa issued a royal decree pardoning and releasing 32 inmates who had been convicted in various court cases and served part of their jail terms. The kind royal gesture, marking Eid Al-Adha, reflects HM the King’s keenness to provide the pardoned inmates with the opportunity to re-integrate society and participate in the Kingdom’s development march.

The Education Ministry said that the window to transfer students from private institutions to public schools would be from July 25 until August 12. The Students School Transfer service is available on the egovernment website.

Applicants will have to provide the documents and certificates mentioned in the service. The approval of the transfer will depend on fulfilling the requirements and on the vacancies in the requested public schools, the ministry added.

North Korea warns youth against using slang from the South

North Korean state media has urged its young people against using slang from South Korea and told them to speak North Korea’s standard language. There were also fresh warnings in North Korea’s official newspaper against adopting the fashions, hairstyles and music of South Korea.

It is part of a sweeping new law which seeks to stamp out any kind of foreign influence, with harsh penalties. Those found in breach of the law can face jail or even execution.

Rodong Sinmun newspaper warned millennials of the dangers of following South Korean pop culture. “The ideological and cultural penetration under the colourful coloured signboard of the bourgeoisie is even more dangerous than enemies who are taking guns,” the article read. It stressed that Korean based on the Pyongyang dialect is superior, and that young people should use it correctly.

The North has recently sought to stamp out South Korean slang, for example a woman calling her husband “oppa” – which means “older brother”. Foreign influence is seen as a threat to North Korea’s communist regime, and it’s Supreme Leader, Kim Jong-un’s grip on power.

He recently labelled K-pop a “vicious cancer” that corrupts the youth of North Korea, according to the New York Times. Anyone caught with large amounts of media from South Korea, the United States or Japan now faces the death penalty. Those caught watching it face prison camp for 15 years.

But despite the risks, foreign influence continues to seep into the North, and highly sophisticated smuggling rings to bring in banned media reportedly continue to operate. Some North Korean defectors have said that watching South Korean dramas played a part in their decision to escape.

Yang Moo-jin, a professor at the University of North Korean Studies, told the Korea Herald that Kim, who was educated in Switzerland, “is well aware that K-pop or Western culture could easily permeate into the younger generation and have a negative impact on its socialist system”. “He knows that these cultural aspects could impose a burden on the system. So by stamping them out, Kim is trying to prevent further troubles in the future.”

The sport of mixed martial arts (MMA) is about individuals, but Austrian standout Ayub Gaziev knows that most of its highly-regarded world champions are forged in strong camps that bring in many great athletes. In a very different atmosphere from boxing, MMA hardly sees any high-profile competitors building training camps around one man or woman as it is often centered around a gym, where several coaches work in conjunction with each other to train a stable of fighters of varying skills and weight classes.

These gyms often take on a close-knit and team-based environment, which is very unusual for an individual combat sport like mixed martial arts. However, it leads to an effective outcome, one of the reasons why Gaziev has chosen to hone his craft under the banner of Top Team Salzburg. Top Team Salzburg is home to a number of European MMA’s household names, including Gaziev’s compatriot and former BRAVE CF Super Welterweight World Title challenger Ismail Naurdiev.

The 31-year-old Salzburg, Austria native has been competing in the professional ranks since 2012, compiling an impressive standing of 12-2-1 with seven victories by way of knockout and two via submission. Furthermore, he is riding high on a three-bout winning streak in the regional circuit that paved the way for him to be noticed by BRAVE Combat Federation earlier this year. Gaziev and his team will be tested once more as he is set to make his promotional debut against Valeriu “The Solitary Wolf” Mircea in a three-round lightweight contest at BRAVE CF 52: Bad Blood in Milan, Italy on August 1st.

Mircea—who has 33 fights to his credit—is currently affiliated with Aurora Mixed Martial Arts headed by Lorenzo Borgomeo and Riccardo Carfagna, who are responsible for training stalwarts such as Mauro “The Hammer” Cerilli, Gianni “The Punisher” Melillo, Danilo “Caterpillar” Belluardo and Leonardo “Puppy” Damiani. The Moldovan may be sharing the training mats with the best coaches and athletes available in his area, but Gaziev is confident that his own support system has geared him up splendidly for the meeting with the seasoned veteran.

US and allies accuse China of global hacking spree