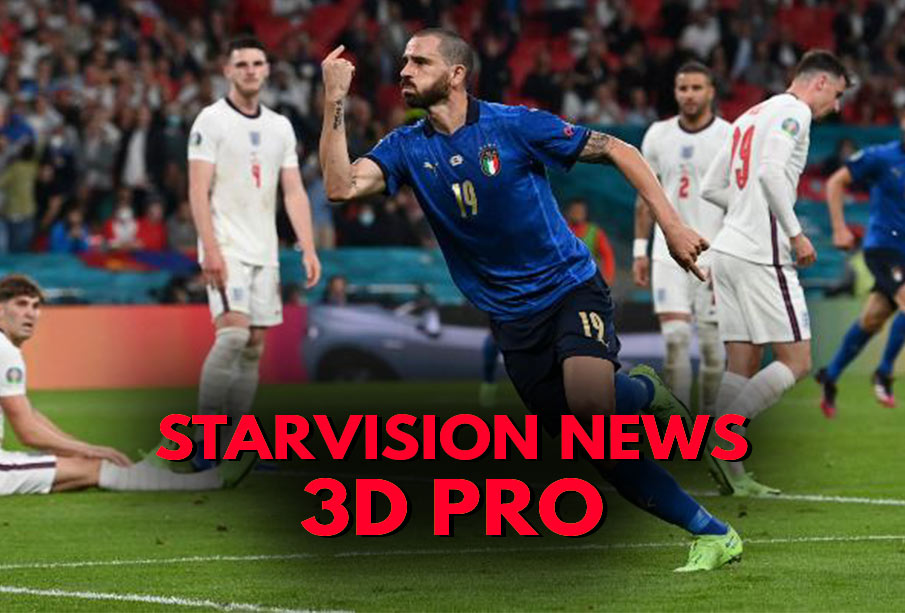 England’s hopes of ending a 55-year wait for a major trophy were crushed in heartbreaking fashion as they lost 3-2 on penalties to Italy in the final of Euro 2020 at Wembley. Despite two saves by Jordan Pickford, missed penalties from Marcus Rashford, Jadon Sancho and Bukayo Saka proved decisive.

In their first men’s final since 1966 and playing in front of a vocal crowd of around 60,000, England made the dream start when they scored in just the second minute, Luke Shaw volleying in superbly after a quick counter.

But Italy slowly started to gain control of the game and equalised midway through the second half when Leonardo Bonucci stabbed in from close range after a scramble from a corner.

England struggled to find their composure but managed to hold on to take the game to extra time and, after another nervous 30 minutes, penalties were needed to separate the two sides.

And in what was only the second European Championship final to be decided by spot-kicks it was Italy who came out on top as England’s incredible run at the tournament fell just short.

Richard Branson rockets to the edge of space

Billionaire Sir Richard Branson successfully reached the edge of space on board his Virgin Galactic rocket plane. The UK entrepreneur flew high above New Mexico in the US in the vehicle that his company has been developing for 17 years.

The trip was, he said, the “experience of a lifetime”. He has now returned safely to earth with his crew. It makes him the first of the space tourism pioneers to reach space, beating Tesla’s Elon Musk and Amazon’s Jeff Bezos.

He was accompanied on the mission by Unity’s two pilots, Dave Mackay and Michael Masucci, and three Galactic employees – Beth Moses, Colin Bennett and Sirisha Bandla.

Sir Richard billed the flight as a test of the space tourism experience he expects to begin selling to customers from next year. Some 600 individuals have already paid deposits for tickets that will cost them up to $250,000 (£180,000).

These are all people who want to reach a height where they can see the sky turn black and marvel at the Earth’s horizon as it curves away into the distance. Such a flight should also afford them about five minutes of weightlessness during which they will be allowed to float around inside Unity’s cabin.

It’s been a long road for Sir Richard to get to this point. He first announced his intention to make a space plane in 2004, with the belief he could start a commercial service by 2007.

But technical difficulties, including a fatal crash during a development flight in 2014, have made the space project one of the most challenging ventures of his career.

“I’ve wanted to go to space since I was a kid, and I want to enable hopefully hundreds of thousands of other people over the next 100 years to be able to go to space,” Sir Richard told before Sunday’s flight.

“And why shouldn’t they go to space? Space is extraordinary; the Universe is magnificent. I want people to be able to look back at our beautiful Earth and come home and work very hard to try to do magic to it to look after it.”

Space tourism is a sector being rekindled after a decade’s hiatus, and it’s about to get very competitive.

India is on track to overtake China as the world’s most populated country by 2027, according to the United Nations. And it’s facing a housing crisis. Home to 1.3 billion people, India has been witnessing an influx of people migrating from villages to cities in search of better job and education prospects.

However, affordable housing remains an unresolved problem, which has lead to a mushrooming of illegal settlements and slums. Informal housing is often unauthorised with poor sanitisation facilities, unplanned drainage, and an erratic supply of clean drinking water and electricity.

The Indian government launched the Housing For All Mission in 2015, with a 2022 deadline. It aims to build 20 million urban housing units and 30 million rural homes. India’s most populous state Uttar Pradesh recently proposed legislation aiming to promote a two-child policy.

Under the state government proposals unveiled on Saturday (July 10), couples with more than two children would not be allowed to receive government benefits or subsidies and would be barred from applying for state government jobs.

The Committee of Foreign Affairs, Defence and National Security at the Shura Council called on the British MPs who signed a petition demanding the release of one of the inmates at the Correction and Rehabilitation Centre to be accurate and objective in getting information from official sources.

It stressed the importance of not undermining historic relations between the two friendly countries and peoples which are based on mutual respect for national sovereignty and no interference in the internal affairs of countries.

The committee affirmed the importance of not interfering in the autonomous and impartial judicial branch, stressing that all verdicts issued at the courts of the Kingdom of Bahrain take place in accordance with the best judicial standards and practices that have always been praised. It added that all defence guarantees for the defendants are applied.

The committee strongly condemned what was reported by the Qatari Al-Jazeera channel about the signing of a petition by four British MPs demanding the release of an inmate implicated in a terrorist case and sentenced to 15 years in prison in cases related to joining a group seeking to disrupt the law, train on the use of weapons and others.

The committee denounced the systematic targeting of the Kingdom of Bahrain by the Qatari Al-Jazeera channel which is deliberately disclosing false information that lacks professionalism and objectivity to shake the security and stability of Bahrain and tarnish its reputation.

A 90-year-old Belgian woman who died from COVID-19 in March had contracted two variants of coronavirus at the same time, which is believed to be the first documented case of its kind, a scientific congress and Belgian media said on Sunday.

The case, discussed at this year’s European Congress on Clinical Microbiology & Infectious Diseases (ECCMID), shows that it is possible to catch two COVID-19 variants simultaneously, the society that organised the congress said in a statement.

The society said the woman became sick with Alpha and Beta types first identified in Britain and South Africa and her doctors said she could have contracted the infections from two different people.

The woman, who was treated at a hospital in Aalst near Brussels, had not been vaccinated, Belgium’s Dutch-language public broadcaster VRT said. Belgium, like much of the European Union, faced vaccine delivery problems early in 2021 and its vaccination programme started slowly, although the EU has now delivered vaccines to cover 70% of the population.

The society, citing discussions at the July 9-12 congress, said doctors believe it was the first documented case of its kind and, although rare, similar dual infections are happening.

“Both variants were circulating (in March) in Belgium,” molecular biologist Anne Vankeerberghen of the OLV hospital in Aalst said on VRT’s website. “It is therefore probable that this woman was infected by two different people with two variants of the virus. Unfortunately, we do not know how this infection happened,” she said.

The European Commission, the EU executive, has warned that it expected the highly contagious Delta variant of the coronavirus to become dominant in Europe this summer, citing estimates from the EU disease prevention agency.

NPRA calls upon public, private organisations to register in the e-visa system

The Nationality, Passports and Residence Affairs (NPRA) on Sunday called upon government and private organisations in all sectors to benefit from the registration service via the e-visa system on www.evisa.gov.bh.

Haiti suspects say they meant to arrest, not kill president

A group of Colombians and Haitian Americans suspected of assassinating Haitian President Jovenel Moise told investigators they were there to arrest him, not kill him, the Miami Herald and a person familiar with the matter said on Sunday.

Moise was shot dead early on Wednesday at his Port-au-Prince home by what Haitian authorities say was a unit of assassins made up of 26 Colombians and two Haitian Americans, plunging the troubled Caribbean nation into deeper political turmoil.

The murder and uncertainty about who hatched the plot is the latest in a succession of blows to hit the struggling country. The United States has rebuffed Haiti’s request for troops and the United Nations would need Security Council authorization to send armed forces.

Citing people who had spoken to some of the 19 suspects detained so far, the Miami Herald said they said their mission was to arrest Moise and take him to the presidential palace.

A source close to the investigation said the two Haitian Americans, James Solages and Joseph Vincent, told investigators they were translators for the Colombian commando unit that had an arrest warrant.

But when they arrived, they found him dead. The news follows reports that some of the Colombians had said they had gone to work as security personnel on Haiti, including for Moise himself.

Photos and X-ray images posted on social media at the weekend said to be from Moise’s autopsy showed his body riddled with bullet holes, a fractured skull and other broken bones, underscoring the brutal nature of the attack.

Via social media, Haitians in parts of the capital Port-au-Prince were planning protests this week against the interim prime minister and acting head of state Claude Joseph. Joseph’s right to lead the country has been challenged by other senior politicians, threatening to exacerbate the turmoil engulfing the poorest country in the Americas. (Reuters)

Then, the Custodian of the Two Holy Mosques and Sultan of Oman, in the presence of His Royal Highness Prince Mohammed bin Salman bin Abdulaziz, Crown Prince, Deputy Prime Minister and Minister of Defence, held a session of official talks. They reviewed the historical deep-rooted relations between the two countries, and discussed aspects of joint cooperation and ways to enhance and develop them in various fields.

India said on Sunday it had temporarily brought back officials from its consulate in Kandahar, a major city in southern Afghanistan, as Taliban fighters continue to gain control amid the withdrawal of international forces.

“Due to the intense fighting near Kandahar city, India-based personnel have been brought back for the time being,” Arindam Bagchi, chief spokesperson at India’s foreign ministry, said in a statement.

“India is closely monitoring the evolving security situation in Afghanistan,” Bagchi said, adding that India’s consulate in Kandahar was being run by local staff temporarily.

India’s foreign minister on Friday called for a reduction of violence, saying the situation in the war-torn nation has a direct bearing on regional security.